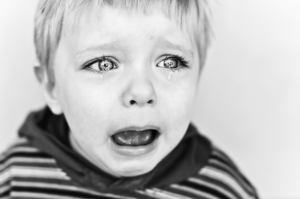 Not sure why I’m so sentimental all of a sudden, or what even made me think of this.  I was at Borders with Ellie, picking out her summer reading list, and this thought just lodged in my head.  I know how this goes and that it won’t leave my head until I write it out.  Which is fine.  I pretty much resolved to change up my content from my running exploits.  Not that I’ll quit running, but I’ve become bored writing about running.  The thought is the times I can remember crying.

Without intending to sound sexist, I think it’s fair to say guys don’t cry as often or as easily as women.  I can specifically recall being told by my older sister Debbie during my grade school years that boys aren’t supposed to cry.  I’m certain she told me this at some point when I was crying simply to shut me up.  I always looked up to Deb for some reason and paid heed.  I say “for some reason” because I don’t have the strongest history of respecting authority.  I disliked more teachers than liked, and never met a school principal I ever cared for.  But back to crying.

This narrative has some guidelines.  Of course I cried like a baby when I was a baby.  And that must have continued well into my toddler years.  No doubt there are many spanking-induced episodes that led to streaming tears.  But those are to be expected and I don’t necessarily remember them.  This enumeration counts from the point when Deb told me boys don’t cry.  Rule two is I have to remember crying.  I’m not so obtuse to believe I’ve only cried a handful of times since then.  But if I can’t remember then I can’t really write about it can I?  Third rule is it has to have been a real cry.  Not some glassy-eyed, enlarged Adam’s apple misty feeling after a particularly sad movie.  Although movies do count if I went to bed still in tears.  So here are the times I remember crying.

I’m starting with a non-crying event first.  I should have cried at my father’s funeral, but I don’t think I did.  I was likely too young to understand.  I was five and he had an open casket viewing.  He had so many friends the grown-ups virtually crowded out all the light in the room from the perspective of a little boy.  I remember going home afterward to a dark house.  No one bothered to turn on the lights.  For some reason I walked up to the living room wall and stood there for what seemed like an hour.  It was probably much less, but I just stood there staring at the wall, wondering who would take care of me.  This is one of those early memories that remain lucid in my mind, but I don’t recall crying.

First time that counts was in 3rd grade when we had to move from Marion, Iowa to Wyoming, Iowa, because my Mom married some Chiropractor.  But that’s not what made me cry.  It was being told that my best friend Scott cried after he learned I was moving away.  That brought me to tears.  I was given my first aspirin to calm me down.

Next, I remember getting a little choked up, enough to recount as crying, after a grade school recess fist fight with my older sister Diane.  No, I didn’t punch her back.  Diane would have a new boyfriend almost weekly and every week I seemed to get into a fist fight with them.  Don’t recall why exactly.  I do recall they were all a year older than me and I took my share of punches to the face.  One week Diane had enough of this, maybe it was a guy she actually liked, and she started punching me.  I let her of course and by the time she stopped smacking me I couldn’t stop the tears.  Not sure if it was pain-induced or ridicule.  Just remember I cried after she stopped.  It’s like you don’t breathe underwater.  You wait until you come up for air.  I waited to cry once my face had some breathing room.  I was in a lot of fights in grade school, lost as many as I won; but I don’t ever recall crying except for that one.

I can’t remember the absolute chronology of the next two times; they were essentially the same time or at least year as the fight with Diane.  One was after reading the ending to Old Yeller.  I’m sure I’m not alone on that score, or for the other time which was during The Brian Piccolo Story.  I’ll admit to getting a lump in my throat and misting up after many other reads or movies, but this was real crying.  And I know now.  At Borders tonight picking out books with Ellie, I saw Old Yeller on the Young Readers shelf.  That’s what is driving these memories.

I’m fairly confident I made it through middle school without ever crying.  And only remember crying once – well twice but for the same event – in all of high school.  I was in a car wreck the summer after my sophomore year and a good friend died in my arms.  The paramedics brought him back several times but that night I sensed he had died.  I made my Mom tell me the truth and after she confirmed he died for the final time in the ambulance, I cried hard the rest of the night.  I even remember ripping the Sex Pistols poster from my wall and shredding it.  And I cried hard again at the services, to the point people sitting next to me were embarrassed.  Couldn’t help it.  The tears flowed like Niagara.  That’s Doug on the left in this picture.

I would have made it through college but my high school sweetheart broke up with me my freshman year.  I actually don’t remember any specific instances of crying, but I’m going to admit to it because I know I was devastated and might have cried a couple of times.  If not, I was certainly pitiful for awhile.

I go a decent stretch but two or so years after graduating college, my Grandmother died.  I came down with the flu on the flight to Iowa and attended her services and funeral with 103° temperature.  Like my Father, her showing was open casket.  She looked beautiful.  At some point after seeing her, I recall standing in the middle of the room and sensing I was going to lose it.  Not just cry, but lose it.  I bolted out the door into the parking lot.  Not sure why I ran and immediately wished I’d brought along my coat.  It was early January and had to be about 0° because I remember my nostrils freezing shut.  I cried as hard as I did when my friend Doug died.  My sickness likely contributed to my emotional state.  I didn’t stop weeping until I vomited.  Feeling better, I returned inside to thaw.

You might not believe this but I’m fairly certain I went a good 10 or 11 years before I cried again.  It was on the drive home after putting down my dog Teddy at the Boulder Humane Society.  He wasn’t the best behaved dog, but I went on an awful lot of runs with him at my side off-leash.  His sister Tara was always off chasing something but not Teddy – he let her play and ran with me.

I’m not trying to carefully map out the exact years here, but it was close to another 10 years before I cried again.  Diane died young from cancer in Galveston, Texas.  I didn’t cry at her funeral, but a couple of months later when the waiter asked me for my order at Tortugas, I broke up.  He had to go away and return for my order a bit later when I regained my composure.  That was embarrassing, but the emotion didn’t end there.  Diane had asked me from her hospital bed to try talking to my oldest sister Kathy.  She didn’t put any conditions on it other than I should reach out.  Kathy hadn’t spoken to me since my wedding that she never attended – nearly 20 years prior at this point in time.  24 years now.  Her actual battle was/is with my Mom whom she also doesn’t speak to – I’m just collateral damage for siding with my Mom.  So I wrote Kathy an email after returning home from the restaurant.  To say the email was mean-spirited probably doesn’t do it justice.  I let her know what a loser I thought she was/is.  Admittedly, I’d had some wine.  Normally I don’t get online intoxicated.  IBM is an online culture and I’ve developed discipline in that regard since before the Internet.  This wasn’t one of those times.  I don’t feel any differently today and would write that email again, although perhaps not in such a crass style.  Needless to say it didn’t win me any broader family support, but I wouldn’t say she talks to me any less now than before.

And that’s it.  Naturally there have been some close moments.  Most recently with my year old nephew Liam.  The news of his need for a heart transplant, and of course the day of the transplant, left Karen in tears for entire days.  I was close.  Some of the Facebook updates, shoot even some of the Twitter updates, would make my throat hard and tear up my eyes a bit.  The thought of a baby going through something so traumatic is enough to make complete strangers cry.  Michelle, my haircut lady, asked me what was going on and I related the story of little L having a successful heart transplant the day before and she started balling.  She didn’t stop crying throughout the entire haircut.  And she doesn’t even have kids.

No doubt I’ve shed a few more tears that I just don’t remember.  Life gives us all a good cry from time to time.  It would seem a strong emotional surrender serves to cement memorable bonds with the past.

2 thoughts on “Made Me Cry”