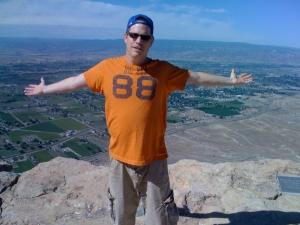 This is me two years ago on top of Mt. Garfield.  I drove out to Grand Junction to give my ole buddy Rob a lift to DIA.  15 minutes to the right of my outstretched hand – stage left – lies Grand Junction.  We couldn’t drive for more than 15 friggin minutes before Rob told me to pull over for a 2000 foot climb up the ugliest approach of eroded foothills I’ve ever seen.  If you’ve ever driven along I70 into Grand Junction – you know what I mean.  The place looks like the end of the world.  Of course, that’s just the base, once you get going the terrain changes dramatically.  It might look like the land before time from I70 but this part of Colorado has got some outstanding hikes.  This was the genesis of my current fitness kick.  That round belly underpinning the 88 on my shirt is now half gone and this year I entered a few road races.

I’ve already captured this summer’s running events.  What’s racing around my mind now are next summer’s possibilities.  I have some wicked opportunities.  There isn’t much talk of pedestrian turkey trots, people are proposing some weird shit.  This week alone was suggested the Warrior Dash in Copper Mountain and the Escape from Alcatraz Triathlon in S.F. Bay.  WTF!  I couldn’t swim 1.5 miles at 18 when I was negatively buoyant.  What are my chances now that I’m a boat anchor?  A high school cross country buddy is even suggesting the Tough Mudder in Vail.  Or he might have been suggesting the Tough Mudder in Austin, but good Lord; is this all the result of having completed the IPR in Ouray/Telluride.  Apparently that run brings out the crazy talk in people.

But I kind of like it.  I don’t intend to do any of these nut-job events, but I like thinking about doing them.  And the really cool thing is I can at least afford to register for and travel to these spectacles if I so desire.  It’s not like 25 or 30 years ago when my pals and I would race unregistered to instead put our money towards a post-race six-pack(s) of Schaefer Beer.  Although the stakes have been seriously raised.  It’s not unusual for event registrations to cost upwards of $100 nowadays.  And let’s not leave out the cost of towing along the family for a night or two in a comfy world class resort.  So if I do choose do run any of these exotic events, I’ll need to choose wisely.

I’ve already entered the Austin Marathon in February 2011.  There’s a plane ticket or two.  But I’ll stay at my mom’s house for that run.  And I’ve entered the lottery to run the Canyon Lands Half Marathon in Moab next spring.  Those two runs will start the season off for me, and you have to admit – they’re pretty damned cool events.  After that, I don’t know.  I have fantasies of becoming competitive in my age division.  That sort of implies I’ll focus on 10Ks.  And I’ve been thinking about an ultra trail run, but I will settle for some cool hiking if plans come together to reunite with some old friends next summer.  I don’t know what I’m going to do yet, but just thinking about it has kept me entertained while I quaff this bottle of Barón De Barbón Rioja 2004 Reserva.