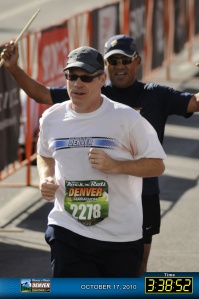 When I ran the 17 mile IPR in September, although it took me 20 minutes longer to complete, I recovered much quicker.  The next day, Sunday, was a travel day.  And actually so was Monday as I flew to NYC and back for IBM in one of those epic 20 hour work days.  But I was running my regular 4.5 mile circuit again by Tuesday and 8 mile runs on the following weekend.  And I felt fine.  It’s been a full week since running the Denver Marathon and I have yet to recover.  Again, I took two days before running.  But this time it was more due to being too tight and sore than schedule.  Not understanding why the difference in recoveries irritates me, so a deconstruction is in order.

First, a description of the soreness.  I was sore and tight everywhere for the first couple of days.  But the symptoms have persisted around my groin.  I was only able to run 1.5 miles the first day – Wednesday.  It did loosen my muscles up quite a bit.  I should have at least walked Monday and Tuesday to work out the lactic acid.  I returned to my 4.5 mile routine on Thursday, and ran 8 miles yesterday – Saturday.  I don’t normally time myself, but did yesterday with a GPS iPhone app since I was running a new route my friend Amy suggested and I wanted to know the distance.  I ran a 9 minute mile pace.  Good God!  I ran an 8:17 mile pace for the entire marathon.  And while I didn’t time the 4.5 mile runs, I suspect they were similarly slow.  My legs feel fine, it’s just extremely high up on my legs, around my groin, hips and lower stomach, that is stiff and weak.  And it goes beyond running.  I can barely hold my bladder past 60 minutes.  I’ve never experienced anything like this before.  I seriously hope it’s from the race and not due to coincidentally reaching some men’s aging milestone.

Thinking back to the race, I recall how pleasant the pace felt.  I’m still amazed how fast I started out, running under an 8 minute pace for the first 10K.  Even though my pace noticeably slackened by 20 miles, I was enjoying the event and was confident I would finish.  I never hit “the wall”.  Or did I?  My experience with hitting the wall stems from running my first marathon at 16 in 1978.  I was running the Dallas White Rock Marathon with high school running mate, Mike O’Neill.  We started out running together, but at 15 miles where the course has its most notable hill – a long slope really – I got sick from the previous night’s indulgences.  This was awkward because this point in the course is also the finish as the race loops around the lake.  So thousands of people were lined up on both sides of the trail and I had to literally dive through a wall of people to find a spot behind a tree for some alone time.  I returned to the trail but had lost Mike at that point.  Running solo at 18 miles, not an uncommon mile marker to hit the wall, my body slowed down like a cassette tape in a Sony Walkman whose batteries were dying.  I didn’t have the running experience to understand what was happening to me.  Essentially, I was out of gas.  All blood sugar was gone and my body was having to find energy stores deeper in my muscles and bone.  I recovered from that after eating some oranges from an aid station, and went on to finish the run.  Since then, I’ve always associated hitting the wall with race nutrition and fluids.  But the link I added above is to an article that explains the wall as something much more complex.

If you’re a backyard chef, you understand the effects on meat of slow cooking.  A brisket, after 8 or 9 hours of slow smoking, begins to break down at a cellular level.  The fats and proteins melt and coalesce into the meat lover’s equivalent of cotton candy.  It’s after this point one can “pull” pork.  I believe this is what happened to my body after 23 miles.  Muscles I hadn’t used before suddenly began to fatigue.  While I spent 20 more minutes running the IPR, my body experienced approximately 15,000 less footfalls than in the marathon.  I’ll admit that I’d also been running around 45 miles per week leading up to the IPR and only 30 miles per week since.  I didn’t think a month of lighter training would significantly affect my performance, and it probably didn’t have that much of an impact.  Regardless, while I was totally hydrated and had been taking in energy as well, the core of my body, my groin, hips, stomach all began to weaken.  My stride shortened and my pace correspondingly slowed.  So perhaps I did hit the wall.  It wasn’t as absolute as the one burned into my memory from the ’78 Dallas White Rock, but my metabolic physics had been altered.  Thinking back, I might have even experienced the mental delusions often associated with the wall.  Somewhere in the last 4 or 5 miles, I started to hear church bells.  Not wearing a watch, I recall thinking I could determine the time by counting the bells ring, but was too tired to count.  And as the song progressed on my playlist, I realized it was AC DC’s Hell’s Bells.  For awhile I thought how ironic that was and I should add it to my post race blog.  I didn’t though because afterward I couldn’t be certain if I ever really heard church bells or only the prelude to the song.  I didn’t want to make the experience up so I left it out of my blog.  I think now I might have been slightly delusional.

So there you have it.  I didn’t train as hard leading up to the Denver Marathon as I did the IPR.  And I suspect my body suffered more fatigue in the marathon than the IPR – which is hard for me to accept.  The IPR is simply the most challenging event I’ve ever run.  But I can’t ignore that my recovery has been slower this week than after the IPR.  The silver lining is that hopefully my core is toughening up.  I did feel better on today’s 8 mile run on the East Boulder Trail.  My groin hasn’t totally loosened up but my stride was longer and faster.  “What doesn’t kill you makes you stronger.”