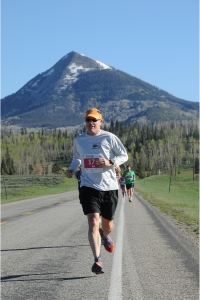 I look good in this pic.  This is in the first 10K of the Steamboat Springs Marathon, with Hahn Peak in the background.  The final 10K was a different picture.  I was broken.  Hobbling across the finish line.  My finish line pics all show me with my head down.  The event photos are published at Metrophoto.com.

Friends and family are advising me to abandon full marathons.  They tell me I should focus on half marathons.  I can understand why.  I’m extremely comfortable with the half.  My running is consistent enough that I’m nearly always in good enough condition to run a half on any given weekend.  I’m highly confident with that distance.  And I may never be totally confident with the full marathon distance, but that’s partly what makes marathons so special.  I’m rarely nervous lining up to the start of events.  Marathons though are a little scary and I like that.  Even elite athletes can’t say for sure exactly how a marathon will turn out for them.  I’m not ready to give up on marathons just yet.  They haven’t all turned out bad.  I’ve had a couple of good ones.  Ran a 3:36 in my first Denver Marathon.  Took 2nd in my division at the 2012 Boulder Marathon.  I still got game.

I’ve run five marathons now since I got back in shape and returned to road races in 2010.  I ran two as a kid that I won’t count, but I’ve run the Denver Marathon twice, the Boulder Marathon last fall, the Austin Marathon in 2011 and this recent Steamboat Springs event.  I should probably count the 25 mile Collegiate Peaks Trail Run – but that’s as different from a road marathon as the 17 mile Imogene Pass Run.  I’m not yet satisfied.  I’ve run some decent times but have yet to put together the perfect race.

I don’t feel that I’ve failed or lost necessarily, but it’s like that.  I want to keep doing it until I get it right.  Getting it right to me means running strong from start to finish.  I’m looking more for being able to maintain my pace in the final 10K than running a personal record, but there’s likely a strong correlation.  Figuring out how to do this is the challenge that keeps me interested.  I’m convinced the trick is taking in the proper nutrition during the run.  The two issues I’ve encountered are hitting the wall and cramping in the final 10K.  I’ve screwed up other ways too but I know how to fix those mistakes.  I’ve yet to master how to maintain energy and electrolytes.

I’m not obsessed about this enough to schedule marathons every month.  I can wait until September for the Boulder Marathon to take another run at it.  Marathons take a lot out of me.  They’re the Super Bowl of running.  I said earlier that I believe I can run a half marathon on any given weekend.  That suggests some decent consistency in my workouts.  But to maintain that level of conditioning for marathons would take its toll.  My knees have their limit.  This is the time of year I normally increase my miles but I need to ensure I do it on trails.  And while trails offer a softer surface; steep, rocky, mountain trails require a higher intensity than pavement so they have a way of taxing the legs too.

My schedule for the remainder of the year is another half in August – from Georgetown to Idaho Springs.  The Flaming Foliage Relay in September and the Boulder Marathon also in September.  I might add a 5K at some point, although I could wait until December for the Colder Bolder.  My Garmin stats currently show a faster pace for my 10K than 5K and that’s bugging me as much as running a decent marathon.