The drives have become substantially further so you take a half vacation day Friday to get an early start. Not as early as planned. Even after you shut down your Mac, loading up the car takes longer than expected with little non-essential tasks here and there. And as you open the trunk to the Honda Odyssey, Kelso rides by on his bike and asks when you’re going to pick up that Sony Trinitron he’s giving to Brit for her new apartment. “Really? Now?” You drive over to his garage and he has 3 big-assed rear projection TVs that he wants to get rid of. Last year this time you also had three. Nobody wants these electronic door stops. They’re heavy. You unloaded one on Brit’s friend and set the other two out front for ARC to pickup. A year later and Kelso, who also owns rental property and for this reason has three nearly identical television sets left behind by tenants, is in a similar situation. You laugh when he asks if you want any of the other two. You shuffle the TV to your garage, load up, and head out – stopping by Snarf’s Sub Shop where Brit works to pick up some sandwiches for the weekend. Where you’re going is too remote to expect to go into town for dinner. You’re driving to the North Cochetopa Pass on Hwy 114. This is the start of your most ambitious hike to date – four segments and 60 miles that will lead you into the final section of the Colorado Trail. The San Juans. 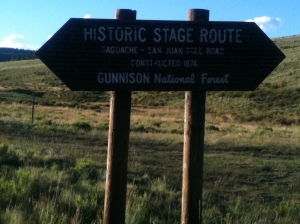 Traffic is a little heavier than you anticipate on Hwy 285 and you meet up with Tumbleweed on the North Pass Trail Head after 5pm. The car shuffle to Eddiesville Trail Head is unbelievably long. 32 miles driving under 20 on dirt and gravel back roads that have seen minimal improvements since stage coaches traversed them 100 years ago. You return to the North Pass Trail Head around 8pm and pitch your tent. This isn’t exactly a camping spot. That’s not unusual as you typically camp in the bush near trail heads, but this is just sort of a large truck stop on the side of the road. You find a slice of pea gravel between the parking lot and even harder terrain. With your tent set up, you sit down with Tumbleweed to eat the very tasty New York steak sandwiches from Snarfs.

You sip beer into the night and watch countless fallin’ stars under a half moon that’s a thousand times brighter out here than a full moon back in town. You’re surprised by a couple that rides up on their bikes with head lamps, asking directions to the trail. Tumbleweed points it out to them and they head out for a night ride – most likely planning to camp somewhere along the way. Interesting date night. You retire by 9pm expecting to rise early to complete two back-to-back segments of the CT. Before you can fall asleep, an 18 wheeler pulls into your parking lot and idles its diesel engine for the next half hour like a cheap window AC unit grinding house flies in third world America. Tumbleweed informs you the next day that this put him to sleep. It irritates the hell out of you but suddenly the driver leaves. Who does that? Who idles on the side of the road for 30 minutes in the middle of nowhere? Damned smugglers.

You have a decent night’s sleep overall but Tumbleweed isn’t messing around on this quad-segment hike and wakes up at 3:30. It’s not terribly difficult for you to wake up at any hour assuming coffee is served. This is made more tolerable given the panoramic view of non-stop falling stars as you drink coffee waiting for the sun to rise. The sun sheds off enough light for you to start on the trail at 5:30am. You catch a picture of the sun behind Tumbleweed as it crests the hills at 6:27am.

The trail is pleasant but not much more remarkable than the previous segment 17. Much of it follows old logging roads, which is easy on your feet but not overly exciting. If you’re not on a dirt road, then you are running in a meadow. Cow pasture is a better description. In fact, the most excitement of the day comes in the morning when Tumbleweed has to chase a herd of cows off the trail in the woods. Cows are more nimble than you ever expected. The trail is also perhaps the flattest you’ve come across, dating all the way back to the foothills. It rises marginally above 10K feet between 3 and 5 miles, but otherwise stays fairly level around 9500 feet.  This is good running ground, although you never get going too fast. You plan to complete segment 19 as well today so you conserve your strength.

The segment ends at Saguache Park Road after 13.8 miles where Tumbleweed has a surprise. He stashed cold drinks here yesterday afternoon. And so that he doesn’t have to carry a cooler afterward, he stored them in the plastic bag the ice came in. Brilliant. He simply stuffs the bag with empties in his hip pack after you drink up. Other than the cows, you meet a northbound thru-hiker on this segment. His name is Dave and he is carrying the biggest back pack you’ve seen to date on the trail. You’re happy to be car camping and carrying a light pack. You’re also happy with your shoe selection. You’re in your street running shoes today, thinking the terrain shouldn’t be too demanding. These protect your heel nicely from the pounding, although your toes are starting to fatigue.

Segment 19 isn’t much different. There’s little tree cover and the sun is heating up. Maybe the trees are on private land but most of the trail runs along cow pastures below the hills and trees. This segment steps up a little in elevation, averaging around 10K feet, but it’s nearly as flat. After 20 miles your feet begin to feel the effects of the rocks. Trail running shoes have a much harder sole than street running shoes. The soft heel felt good at first but now everything feels bruised. You’re ready for this segment to end. And it does soon enough. The two segments combine for 28 miles but the consistent running helps you to finish in 8.5 hours. After spending several hours shuffling cars on the stage coach roads (while listening to Kinks Live on the Road), driving into town for dinner is out of the question – but you have your Snarf’s sandwich and Tumbleweed makes a killer campfire. In fact, the Eddiesville Trail Head is an excellent campsite. This is the first time in all 19 segments you have the opportunity to really enjoy winding down. Gold Hill in Breckenridge was nice, but it didn’t have a fire.

It doesn’t seem possible, but Tumbleweed rises even earlier Sunday morning. 3:11 by your clock. No doubt you’ll need an early start today. You plan to add a climb up San Luis Peak which will make today’s hike a little over 30 miles. Again, the bright stars in a clear sky make waking up so early worthwhile. Falling stars are the perfect compliment to coffee – better than doughnuts. Some campers next to your site are up as well. They plan to summit San Luis too. They have a thermometer and let you know it’s 27°. You believe them. It’s noticeably cooler, plus there’s a stiff breeze. You drink your coffee using the side of the van for shelter.

You begin today’s hike around 5:15am, well before there’s sunlight, using your headlamps. Tumbleweed’s slow to warm up and you’re ready to shed some gear well before him. You discover this is because you neglected to remove a couple of layers of fleece under your wind jacket. That’ll add some weight today. The trail is easy enough to follow in the dark. It follows along the same Cochetopa Creek bed as yesterday. It’s an extremely gentle slope up 2500 feet in 9 miles to the San Luis Peak saddle.  Along the creek you surprise a Moose cow and her calf, and then later see a herd of Elk. 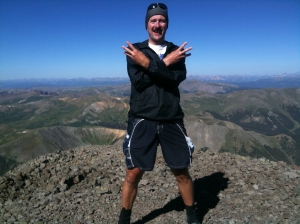 You diverge from the CT at this saddle and begin to climb up the 14,014 foot San Luis Peak. It’s only about a 3 mile round trip making it hard to resist. You forgot how steep these peaks can be. It’s been several weeks since you climbed Mt. Elbert and Mt. Massive. You discover 3 others already on the summit. This is nice because they take your picture standing with Tumbleweed. Not many of those. That’s the picture at the start of this blog. From this peak you can see Mt. Sneffels and the other mountains above Ouray and Telluride. You have fond memories of that patch of Colorado for the Imogene Pass Run you did last summer. You wonder how well you’d perform this September given the excellent condition of your trail legs. But no time for race events this summer. You’re committed to the CT.

Back down to the saddle, you launch into segment 21 and this is where time slows down. From pass to rim trail to pass to rim trail to pass to pass, and this continues. You cross at least a half dozen pass/saddles. But you never dip below tree line except one time. The trail bounces up and down 1000 feet each of the remaining 15 miles. Your expectations of maintaining a 3 mile per hour pace were naive. But the views are awesome. Segment 21 is possibly the most visually impressive segment of the Colorado Trail. This pic of you above gives an idea of how dramatically short the valleys are that you hop through from pass to pass. Each one seems to have some derivative branch of Miners Creek.

The final hump terminates on Snow Mesa where you soak your feet in a shallow pond to reduce the swelling. This works quite well and contributes to your completion of the last 5 miles. Crossing Snow Mesa provides you with the first relatively flat hiking since the terrain turned vertical at San Luis Peak. This provides a cool down of sorts and allows you to recover before the final descent into Spring Creek Pass. Before reaching the exit however you must plow through a thousand sheep grazing on the grassy plateau. The leather-faced sheep herder suggests you walk around the sheep, but you’re thinking more in terms of a straight line to the end and ignore him as you follow the trail which leads right through the middle of the herd.

This mesa walk feels like 3 or 4 miles but you don’t mind for the recovery it provides. And it’s just cool to look at. You’ve been advised to expect a steep 1.5 mile descent and it is. Plus it’s rocky. The pain returns to your feet. But this is also the end as you reach the Spring Creek Trail Head after 13 hours of hiking. Truly an epic ultra. With the completion of segment 21 you are now in the final section of the Colorado Trail. Of course, while the previous 4 sections contained only 5 segments each, this section contains 8 segments. That leaves 7 more. Your plan is to return in September to complete 3 segments and then again in October for another aggressive 4 segment weekend that will finish up in Durango. There’ll be a party in the San Juans that weekend.