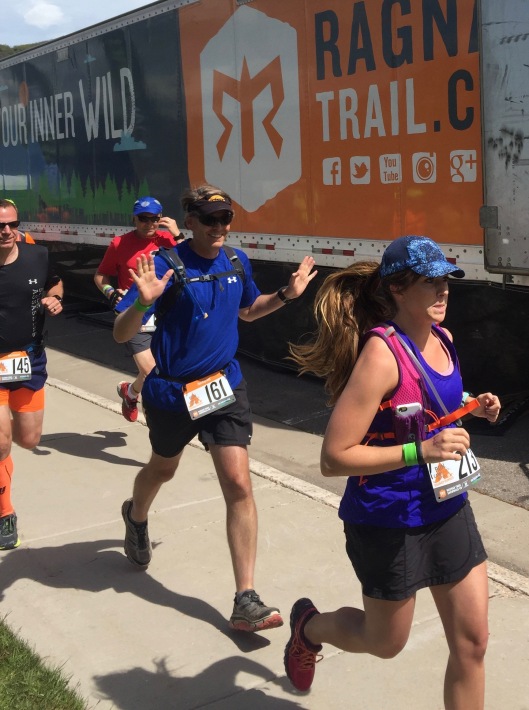 Our relay team name references an exchange among team members a few years ago about what to say when you see a mountain lion on the trail.  I wasn’t there, but it captures the zaniness of these runners well.  This photo is of Ken running the first leg of the Ragnar Snowmass Mountain Trail Relay this weekend.  Ken runs the green loop which is the easiest of the three trail loops for the relay.  It’s four miles in length and has an elevation gain of over 600 feet.  Most of the climb is in the first two miles while the return is back down hill.  This is my first loop as well and I ran my fastest pace of the event.  I raced it hard knowing my legs wouldn’t recover well enough to run the other loops as hard.  And maybe because I was a little excited for my first run.

Carolyn is next out of the gate and runs the yellow loop, considered tougher than the green because of the more intense elevation gain, although it’s nearly the same distance, going up the first half and returning back down.  Carolyn was a ballet dancer before getting into running.  You can almost tell by her running shorts that look more like a girlie, party dress.  Carolyn is a trail dancer. 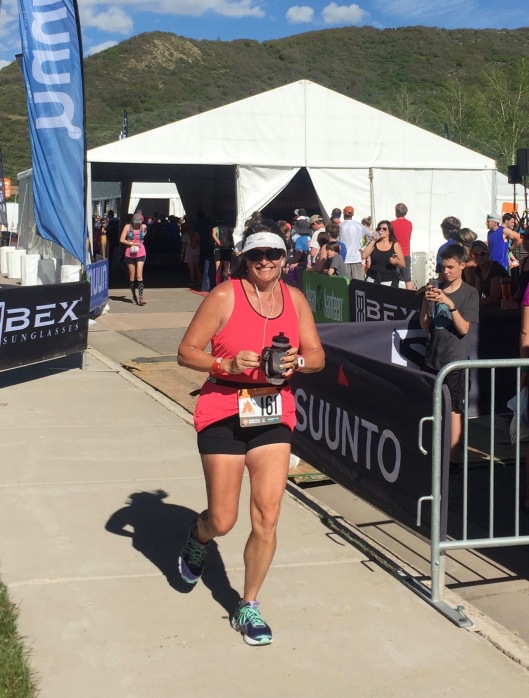 Eve, pictured here, runs our third and final loop – the red loop – the toughest both in terms of distance, 7 miles, and elevation gain, 1,250 feet.  The rest of us repeat the same three loops.  I run my loops in this order, but run an additional green loop for another teammate who couldn’t make the trip.  I ran the yellow loop at night, under the stars.  My red loop pace is a minute per mile slower than my green loop, but involved a great race against another runner named Dave.  This course rises for 3.5 miles before dropping back down for the second half.  Dave remained a step ahead of me the entire climb, then widened his lead over me for the descent.  He ran out of steam though the final mile.

Beth, Keith and Brian complete our team.  I don’t have pictures of everyone running, but have to show this photo of Henry, Kristin’s 13 year old son.  He ran two of her loops with her.  This second run, where he is pictured here about two minutes from the finish, is the 7 mile, 1250 foot, ball-buster, red loop.  Henry’s mom, Kristin, establishes a lead on him after a mile, and never looks back.  Understand, some of the runners I passed on this course were walking, but several others were standing to the side, bent over in some cases, negotiating terms with God for oxygen.  Kids don’t run up mountains like this for fun, because there’s nothing fun about it.  But Henry couldn’t turn around because his mom was running up the hill in front of him.  How can a boy turn from such a challenge?  He finished a full mile behind his mother, but he finished strong.  And that’s my idea of parenting.

I raced two of the loops hard.  My first run over the green loop, and my fourth run on the red loop.  I preserved my leg strength on the middle two runs with a slower pace, when it became clear during the second loop that surviving to my final run was paramount.  Racing three miles downhill on a mountain trail is about as fun as it gets.  It’s also exhausting, as was this entire weekend.  These relays are as much about sleep deprivation as running.  Beth ran it with the expectation the incessant running would be good prep for her TransRockies Run later this summer, where she’ll have to maintain over 20 miles per day, for six days, running from Buena Vista to Beaver Creek.  We completed this relay after 23 hours of non-stop running.  I might take today off.