This week included a couple of runs in the never-ending rain.  Normally I enjoy the runs where I can literally kiss the low-hanging Colorado clouds.  Ever see the 1983 video of U2 perform at Red Rocks?  It’s like running in some mystical place with unicorns.  This has been all too common place lately.  Today though was clear blue sky and I kissed the clouds goodbye.  Taking a cue from Jabe’s recent facebook update that the Eagle Trail is open, I headed out to the Boulder Valley Ranch set of trails.  I can’t believe I have never run here before.  It’s not exactly exciting.  Very few trees.  But Gadget Girl often runs here with her dog Otis; so does Jabe’s running team.  Given conditions, I’m happy to run out here in the prairie grass.

I need to keep up my trail running.  I signed up this week to run the Durango Double Ultra, a 50K (30 mile) trail run through the San Juans.  My first ever ultra.  This wasn’t on my radar but with my two marquee September runs cancelled, I need to up my game for October.  I’ll follow this ultra the next weekend with the Denver Marathon.  New plans.  Hard to explain but maybe this has happened to you before.  You train hard for a marathon.  Sometimes when an event is cancelled, you feel like you escaped a bullet because you weren’t quite prepared.  I was ready though.  This might have been overly optimistic but I thought I had a chance at an 8 minute pace which would qualify me for Boston.  When you reach that level of fitness, you sort of want a replacement marathon.  Only thing is now I have to maintain this fitness level another month.  I can do that.  If I survive the ultra, I’ll be primed for the marathon. 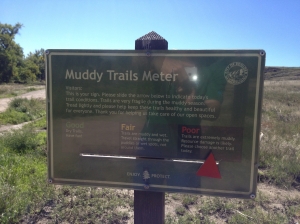 My Team Naked partners plan to run Eagle Trail tomorrow.  I have to bail on them to drive my in-laws to DIA.  It’s a large trail system.  I parked at the Eagle Trailhead near the Boulder Res.  The first trail here is a 3.7 mile lollipop.  Eagle Trail begins as a half mile stick, then forks left while Sage forks right.  The two forks join up again 1.35 miles later to form the loop.  I forked right onto Sage and then right again onto Cobalt.

This led me to North Broadway Road where I returned on yet another fork right called Deggee Trail.  Not sure how you pronounce that.  I could have returned more directly but I wanted to get in a long run so took a number of exploratory trail spurs.  I forked right on Hidden Valley Trail which I could have taken earlier for another loop option.  I also humped up onto Mesa Reservoir on the return.  I think on future runs I’ll make a large loop out of Hidden Valley Trail and the Sage/Eagle combo.  That’s probably good for a 6 mile loop.  Twice makes 12 miles. 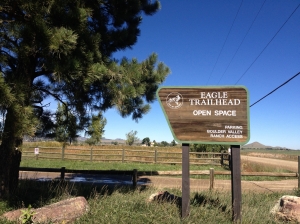 Much of this trail is fairly pedestrian.  In fact, the first loop is double track.  Still, gaiters are a good call to keep the little pebbles out of your shoes.  I think the muddy trail warning sign could be dialed back a bit from poor to fair.  The mud’s not extreme, although sticky in spots.  The trail is nice and soft, feels good on the knees.  Look at that blue sky in this last photo.  About time.  Plus the temperature was a fresh 54°.  Perfect seasonal running conditions have returned to Boulder County.

2 thoughts on “Kiss the Clouds”